EUTOP.news > Nicolas > Why Tonga Volcano erupted, the reason for the volcano that shook the whole earth was revealed

Why Tonga Volcano erupted, the reason for the volcano that shook the whole earth was revealed 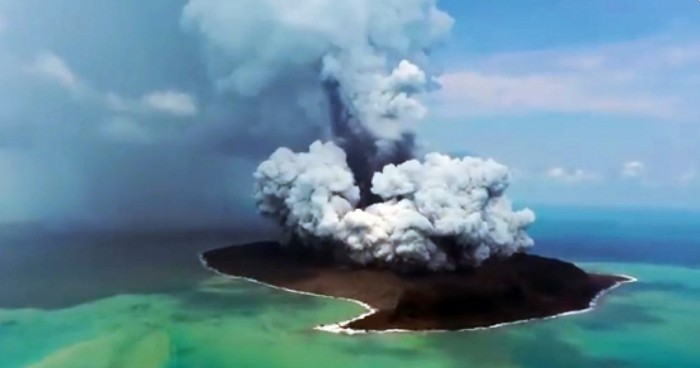 The name of this volcano, which shook the whole earth, is Tonga Volcano. It is located in the South Pacific Ocean near New Zealand. When it exploded, its sound was clearly heard up to 2300 km away. That is, if there is an explosion in Delhi, then the sound should go till Chennai. First let us understand that what happened due to the eruption of this volcano?

What happened when Tonga volcano erupted?

After the volcanic eruption, a plume of ash and smoke went up to 58 km. A mushroom-like shape was formed after the explosion. The shockwave ran around the earth twice. There was a tsunami of 4 feet high waves. Immediately its effect was visible up to 250 km. A big crater was formed in the sea, which gave strength to the tsunami. The explosion and its wave were also captured by satellites circling in space. After the eruption, most of the outflow of the volcano was submerged in water.

Why did Tonga Volcano explode?

In fact, the day a terrible explosion took place in it. A day before that, small explosions were taking place inside it. Just like setting fire to the twine of a bomb...then it slowly smolders. And then the bomb suddenly explodes. Due to these small eruptions, the main vent of the volcano was closed. A plume of hot lava and gas was growing inside the ocean. The pressure was building. The pressure was increasing due to this process going on for a month. The temperature of the magma reached 1000 degrees Celsius. As soon as it met the sea water of 20 ° C, the volcano found a place to release the pressure and exploded.

What was happening at that time in the ocean and atmosphere

Volcanologist Melissa Scruggs of the University of California said that hot melt stones were rapidly mixing with the water inside the ocean. Steam was building. Because of this the pressure was building up. Sea water turning into steam helped turn the lava into ashes. When the ash flew 58 km, the ice crystals present in it charged the clouds. It was just here that the rain of thunder started. At this time, 80 percent more electricity was falling on the volcano from the sky.

What came out of this volcanic eruption

Melissa Scruggs said that after the volcanic eruption, 290 million metric tons of hot material came out of the volcano. Half of them went into space. Due to which a strong shockwave was felt around the earth. That too twice. The first two hours were quite frightening. It was the deadliest eruption since the 1991 eruption of Mount Pinatubo in the Philippines.

Why were scientists worried about the explosion?

Volcanic expert Janine Krippner of the Smithsonian's Global Volcanism Program said that when a volcano's vent, the tube connected to the Earth, is inside water, it is difficult to understand about it. At that time scientists had very little information. Because of which a more accurate prediction could not be made. This situation is very scary. Because the shockwave was not just over land or sea. Its effect was also in the atmosphere. This shock wave spread all over the earth at the speed of sound.

American meteorologist Chris Wagasky calculated the incidence of lightning strikes before, during and after a volcanic eruption. Compared to normal days, 30 thousand more lightning fell around Tonga volcano even before the eruption. After the explosion, lightning struck here more than 4 lakh times for the next three hours. Which was later reduced to 100 lightning per second. Earlier, such an incident of lightning was seen in Anak Krakatau Volcano in Java. There, lightning was falling 8000 times every hour. Which satellite saw the Tonga explosion?

Tonga Volcano is located on the island of Hunga Tonga-Hunga Haapai. Which was first seen by the GOES West Earth Observing Satellite. This satellite is operated by the National Oceanic and Atmospheric Administration (NOAA) of America. The satellite saw that after the explosion, a strong plume of ash and smoke rose towards the sky. Where is Tonga Volcano?

Hunga Tonga-Hunga Haapai Island is surrounded by 170 islands. Which makes up a kingdom of Tonga islands in the South Pacific Ocean. The explosion caused a 4-feet-high tsunami in the capital of Tonga, Nukualofa. Which is about 65 kilometers away from this volcano. A sonic boom was heard across the Pacific Ocean. This voice reached Alaska.

There has been an explosion before

This explosion took place on 15 January 2022. Before this, there were explosions on 13 January 2022 and 20 December 2021. Their pictures were also taken by GOES satellite. The explosion this time was seven times more powerful than the December blast. Its smoke reached directly into the Earth's atmosphere. New Zealand Prime Minister Jacinda Arden told the news agency AP that her scientists are studying it.