EUTOP.news > Nicolas > Fuel prices reach new record! And cost to charge an electric car rises by a fifth in UK

Fuel prices reach new record! And cost to charge an electric car rises by a fifth in UK 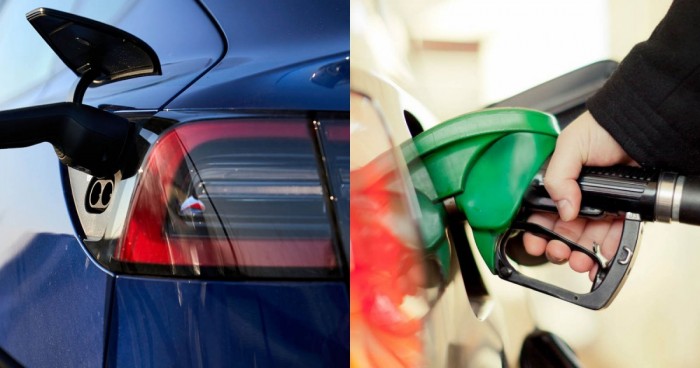 Filling up a typical 55-litre fuel tank with diesel now costs about £100, while for petrol it is about £94.

The average price for diesel reached 181.6p a litre on Thursday, according to data firm Experian Catalist - another record.

Filling up a typical 55-litre fuel tank with diesel now costs about £100, while for petrol it is about £94.

RAC fuel spokesperson Simon Williams said: "While the chancellor chose not to intervene on fuel prices earlier this week, drivers continue to pay around 30p a litre in VAT alone.

"It seems very unfair that the Treasury should benefit so significantly at the expense of hard-pressed motorists who are struggling to make ends meet because of sky-high pump prices."
Advertisement

AA spokesperson Luke Bosdet said the only silver lining for motorists is that driving in the summer is less demanding on fuel consumption than in winter due to warmer engines and less of a need for using heaters and wipers.

"If drivers can get more miles out of a gallon of fuel, the savings are big," he said.

"There are 12 gallons in the typical tank.

"The 171p from that litre divided by the 55 litres in a tank equates to a 3p-a-litre saving at the pump.

"Well worth moderating and smoothing your speed, leaving more space between you and the guy in front and driving away from the lights and roundabouts a bit less aggressively."

RAC analysis found that the average price of using a public rapid charger has increased by nearly 8p per kilowatt hour since September.

RAC analysis found that the average price of using a public rapid charger in Britain increased from 36.7p per kilowatt hour (kWh) in September last year to 44.6p per kWh this month.

This has added £4 to the typical cost of completing an 80% rapid charge of a family-sized EV (electric vehicle) with a 64kWh battery.

The RAC attributed the increase to a 65% spike in the wholesale cost of electricity, which was driven by surging gas prices.

The motoring services firm said charging an EV is still “excellent value” compared with refuelling a petrol or diesel car.

It costs around 10p per mile to use a rapid charger, up from 8p last September.

Over the same period the per mile cost of filling a petrol car has soared from 15p to 19p, with the price for diesel models rising from 16p to 21p, according to the analysis.

Demand for electric cars has soared in recent months.

The Society of Motor Manufacturers and Traders anticipates that plug-in cars such as pure electrics and plug-in hybrids will account for more than a quarter of the new car market by the end of the year.

"There’s no doubting that charging an EV still represents excellent value for money compared to filling up a petrol or diesel car" - Simon Williams, RAC spokesman

RAC spokesman Simon Williams said: “Just as the price that drivers of petrol and diesel cars pay to fill up at the pumps is driven by fluctuations in the world oil price, those in electric cars are affected by gas and electricity prices.

“But while electric car drivers may not be immune from the rocketing price of wholesale energy – most notably gas, which in turn dictates the cost of electricity – there’s no doubting that charging an EV still represents excellent value for money compared to filling up a petrol or diesel car.”

Mr Williams said it is “totally unfair” that EV drivers who cannot charge at home because they do not have off-street parking pay four times more tax for electricity when using public chargepoints.

“Given the cost-of-living crisis, it’s surely only fair that everyone pays the same level of VAT no matter where they buy their electricity from,” Mr Williams added.

Former Top Gear presenter Quentin Willson, founder of the FairCharge campaign to remove barriers to the transition to electric cars, said: “Keeping a watch on charging prices is essential to make sure the electricity for charging up EVs never gets close to the cost of filling up with diesel.

“EV drivers need free-to-access data on charging prices across the country. And charging operators need to know that everybody is watching.”