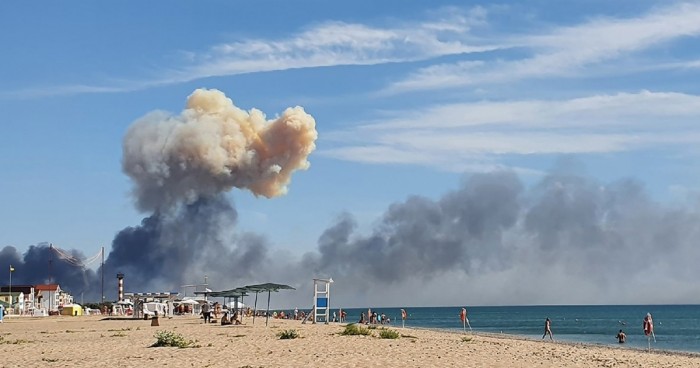 Powerful explosions rocked a Russian air base in Crimea and sent towering clouds of smoke over the landscape Tuesday in what may mark an escalation of the war in Ukraine. At least one person was killed and several others were wounded, authorities said.

Russia's Defense Ministry denied that the Saki base on the Black Sea had been shelled and said instead that munitions had blown up there, but Ukrainian social networks were abuzz with speculation that it was hit by Ukrainian-fired long-range missiles.

Videos posted on social networks showed sunbathers on nearby beaches fleeing as huge flames and pillars of smoke rose over the horizon from multiple points, accompanied by loud booms. Crimea Today News said on Telegram that witnesses reported fire on a runway and damage to nearby homes as a result of what it said were dozens of blasts.

Russia's state news agency Tass quoted an unidentified ministry source as saying the explosions' primary cause appeared to be a "violation of fire safety requirements." The ministry said no warplanes were damaged.

Ukraine's Defense Ministry said sarcastically on Facebook: "The Ministry of Defense of Ukraine cannot establish the cause of the fire, but once again recalls the rules of fire safety and the prohibition of smoking in unspecified places."

A presidential adviser, Oleksiy Arestovych, said cryptically in his regular online interview that the blasts were caused either by a Ukrainian-made long-range weapon or were the work of partisans operating in Crimea.

During the war, Russia has reported numerous fires and explosions at munitions storage sites on its territory near the Ukrainian border, blaming some of them on Ukrainian strikes. Ukrainian authorities have mostly remained mum about the incidents.

If Ukrainian forces were responsible for the blasts at the air base, it would be the first known major attack on a Russian military site on the Crimean Peninsula, which the Kremlin annexed in 2014. A smaller explosion last month at the headquarters of Russia's Black Sea Fleet in the Crimean port of Sevastopol was blamed on Ukrainian saboteurs using a makeshift drone.

Russian warplanes have used the Saki base to strike areas in Ukraine's south on short notice.

One person was killed in Tuesday's explosions7, said Crimea's regional leader, Sergei Aksyonov. Crimean health authorities said nine people were wounded, one of whom remained hospitalized. Others were treated for cuts from shards of glass and released.

Officials in Moscow have long warned Ukraine that any attack on Crimea would trigger massive retaliation, including strikes on "decision-making centers" in Kyiv.

Several countries in Europe dependent on Russian energy suffered another blow with confirmation Tuesday that oil shipments have stopped through a critical pipeline.

Russian state pipeline operator Transneft said it halted shipments through the southern branch of the Druzhba oil pipeline, which flows through Ukraine to the Czech Republic, Slovakia and Hungary.

Transneft cited complications because of European Union sanctions for its action on Aug. 4, saying its payment to the company's Ukrainian counterpart was refused.

The northern leg of the Druzhba pipeline, which runs through Belarus to Poland and Germany, was unaffected, Transneft reported.

EU leaders agreed in May to embargo most Russian oil imports by the end of the year as part of the bloc's sanctions over Moscow's war in Ukraine.

The embargo covers Russian oil brought in by sea but allowed temporary Druzhba pipeline shipments to Hungary and certain other landlocked countries in central Europe.

Slovakia's oil pipeline network operator, Transpetrol, and the refining company Slovnaft confirmed that Druzhba shipments to the nation had stopped. Slovakia receives almost all its oil through the Druzhba pipeline.

Slovnaft, which is owned by Hungary's MOL energy group, said its production has not been affected.

Slovnaft spokesperson Anton Molnar said the company and MOL were discussing with Russia and Ukraine an option for MOL, or Slovnaft, to pay the transit fees.

Slovakia's economy minister, Richard Sulik, previously said his country has enough oil in its reserves for about 120 days.

President Joe Biden formally welcomed Finland and Sweden joining the NATO alliance Tuesday as he signed the instruments of ratification that delivered the U.S.'s formal backing of the Nordic nations entering the mutual defense pact, part of a reshaping of the European security posture after Russia's invasion of Ukraine.

"In seeking to join NATO, Finland and Sweden are making a sacred commitment that an attack against one is an attack against all," Biden said at the signing as he called the partnership the "indispensable alliance."

The U.S. became the 23rd ally to approve NATO membership for the two countries. Biden said he spoke with the heads of both nations before signing the ratification and urged the remaining NATO members to finish their own ratification process "as quickly as possible."

The Senate last week approved the once non-aligned nations joining the alliance in a rare 95-1 vote that Biden said shows the world that "the United States of America can still do big things" with a sense of political unity.

The countries sought out NATO membership earlier this year to guarantee their security in the wake of Russian President Vladimir Putin's offensive in Ukraine. The North Atlantic Treaty Organization's rules require the consent of all of its 30 existing members before Finland and Sweden can officially accede into the alliance, which is expected in the coming months.

The candidacies of the two prosperous Northern European nations have won ratification from more than half of the NATO member nations in the roughly three months since the two applied. It marks one of the speediest expansions of the pact of mutual defense among the United States and democratic allies in Europe in its 73-year history.