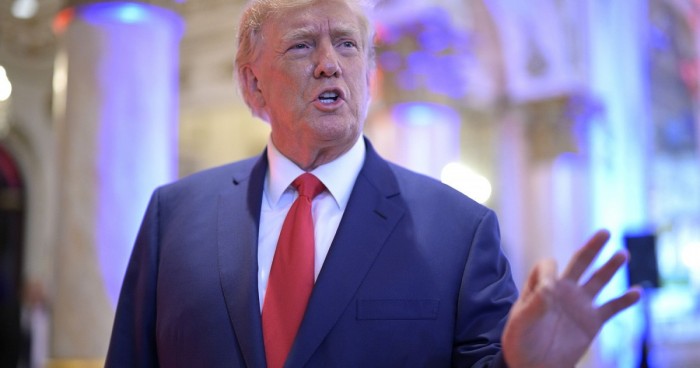 Former President Donald Trump expressed his solidarity with the rioters who attacked the U.S. Capitol on Jan. 6, 2021 in a video for a fundraising event on Thursday night hosted by the Patriot Freedom Project, which assists the families of those being prosecuted by the government.

"People have been treated unconstitutionally in my opinion and very, very unfairly, and we're going to get to the bottom of it," he said in the video, which appears to be shot in his Mar-a-Lago estate in Palm Beach, Florida. He also complained about the "weaponization of the Department of Justice," and claimed the nation was "going communist."

Trump's video comes just days after far-right Oath Keepers leader Stewart Rhodes and his associate Kelly Meggs were convicted of seditious conspiracy for trying to stop the peaceful transfer of power from Trump to President Joe Biden. Rhodes, Meggs and three other associates were also convicted of obstructing Congress as it tried to count electoral votes — an offense that carries up to 20 years in prison.

More than 800 defendants from nearly every state and the District of Columbia have already been arrested and federally charged for their participation in the Jan. 6 attack.

Trump's statement of support was released after a controversial private dinner at his Mar-a-Lago resort with rapper Kanye West, also known as Ye.

Recently, Mr. West has made numerous comments reported to be 'antisemitic' and attended the dinner with a guest: described by media as 'white nationalist and Holocaust denier' Nick Fuentes. Trump has since claimed he didn't know of Fuentes before their dinner — a statement that Fuentes confirmed — but the meeting brought forth harsh criticism from Republican rivals and allies of Trump alike, including former Vice President Mike Pence.