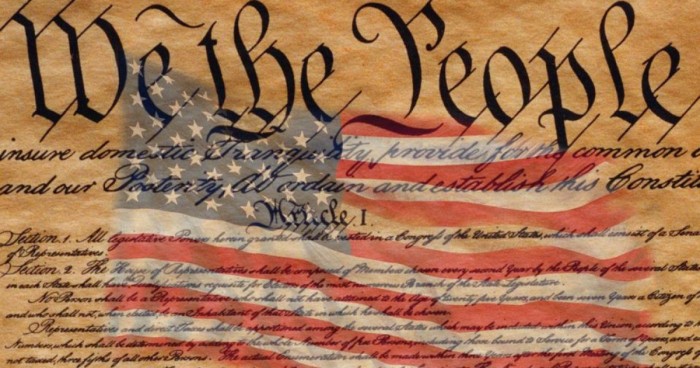 A host of lawmakers from both parties have sharply rebuked former President Trump over the past few days, after he called for the suspension of the Constitution in order to overturn the results of the 2020 election. Selection by Axios.

Driving the news: Repeating his oft-cited false claims of election fraud in the 2020 election in a Truth Social post on Saturday, Trump wrote that such fraud "allows for the termination of all rules, regulations, and articles, even those found in the Constitution."

Trump's remarks were condemned by the White House, with White House Deputy Press Secretary Andrew Bates saying in a statement that, "attacking the Constitution and all it stands for is anathema to the soul of our nation."

"Trump just called for the suspension of the Constitution to overturn the 2020 results. Georgia VOTE. You stood tall against Trump and his minions last time. A win for Warnock is another win for democracy," Sen. Amy Klobuchar (D-Minn.) tweeted Saturday.

"A few hours ago the leader of the republican party donald trump called for destroying the Constitution and making himself dictator," Rep. Bill Pascrell (D-N.J.) tweeted.

"Every congressional reporter should demand responses from Congressional Republicans about Donald Trump’s call for the Constitution to be terminated … how many of them called themselves 'Constitutional conservatives' during the Obama years???" Rep. Eric Swalwell (D-Calif.) tweeted Saturday evening.

“Trump’s words and actions are well beyond the bounds of acceptable political discourse, they stoke hatred and political violence, and they are dangerous," Rep. Don Beyer (D-Va.) said in a statement.
"Trump has openly declared himself an enemy of the Constitution, and Republicans must repudiate him," Beyer added.

"For Donald Trump, last week it was dinner with antisemites. Now he’s calling for an end to America’s constitutional democracy. He’s out of control and a danger to our democracy. Everyone must condemn this attack on our democracy," Senate Majority Leader Chuck Schumer (D-N.Y.) tweeted Sunday.

Newly elected Democratic Leader Hakeem Jeffries (D-N.Y.) told ABC's "This Week" on Sunday that he "thought it was a strange statement."

"The Republicans are going to have to work out their issues with the former president and decide whether they're going to break from him and return to some semblance of reasonableness, or continue to lean into the extremism, not just of Trump but of Trump-ism," Jeffries added.

Rep. Dave Joyce (R-Ohio), appearing on the same program, did not rule out supporting Trump if he won the Republican primary ahead of the 2024 election.

"I will support whoever the Republican nominee is," Joyce said when asked whether he would support Trump despite his calls to suspend the constitution. "I just don't think that at this point he'll be able to get there because there are a lot of other good quality candidates out there."

Pressed about his answer, Joyce said Trump "says a lot of things, but that doesn't matter it's ever going to happen" and said suspending the constitution was a "fantasy."

Rep. Mike Turner (R-OH) said Sunday on CBS' "Face the Nation" that Trump's remarks were "certainly not consistent with the oath we all take."
"I vehemently disagree with the statement that trump has made," Turner added.
"Obviously I don't support that. The Constitution is set for a reason, to protect the rights of every American. So I certainly don't endorse that language or that sentiment," Rep.-elect Mike Lawler (R-N.Y.) told CNN's "State of the Union" on Sunday.

"No honest person can now deny that Trump is an enemy of the Constitution," Rep. Liz Cheney (R-Wyo.) tweeted Sunday.

"Suggesting the termination of the Constitution is not only a betrayal of our Oath of Office, it’s an affront to our Republic," Sen. Lisa Murkowski (R-Alaska) tweeted Sunday evening.

“I think everyone that serves in public office, everyone that aspires to serve or to serve again, should make it clear that we will support and defend the Constitution of the United States, which I believe by God’s grace I was able to do during not only my tenure as vice president but in those tumultuous days at the end," former Vice President Mike Pence told WVOC radio in Columbia, S.C.