EUTOP.news > Andrew > Georgia believes Ukraine wants it to become a party of conflict

Georgia believes Ukraine wants it to become a party of conflict 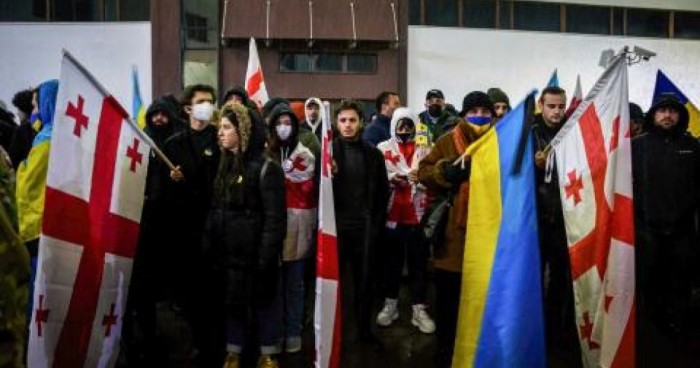 Kyiv wants Georgia to become a party to the military conflict between Ukraine and Russia, the chairman of the parliamentary faction Georgian Dream Mamuka Mdinaradze said, commenting on the statement of the Charge d'Affaires of Ukraine in Tbilisi, reports Armenia News linking Georgia-Online.

"It is not in Georgia's interest to become a party to Russia's occupation, we will support peace. When the representative of the country says that Georgia should supply arms and military equipment to Ukraine, it is obvious that they objectively have no special expectations with regard to supplies of special arms or military equipment from Georgia. The message voiced by this person is that Georgia should become a party to the military conflict," Mdinaradze noted.

Mdinaradze was responding to a statement of Andriy Kasyanov, a representative of the Ukrainian Embassy to Georgia, who on Tuesday said that “despite numerous requests, no response has been received from the Georgian Government regarding supply of military and other dual-purpose equipment to Ukraine” amid the latter’s struggle against the Russian invasion, - says Agenda.ge

At the same time, he noted that Georgia provided Ukraine with "unconditional political and humanitarian assistance beyond the scope and limits of its capabilities," while it could not and would not provide military assistance.

Mdinaradze stressed the “main point and goal” of the statement by Kasyanov was for Georgia to “affirm itself as a party in a conflict” while the country was sheltering “more than 30,000 Ukrainian IDPs, provides humanitarian aid, and is a supporter or co-author of more than 400 documents in support of Ukraine”.

Georgia declares its full and absolute political support to Ukraine, provides humanitarian aid beyond the scope of its capabilities, but cannot and will not provide military aid, because a country with occupied territories, a country under a risk, cannot appear as a military supporter”, he concluded.