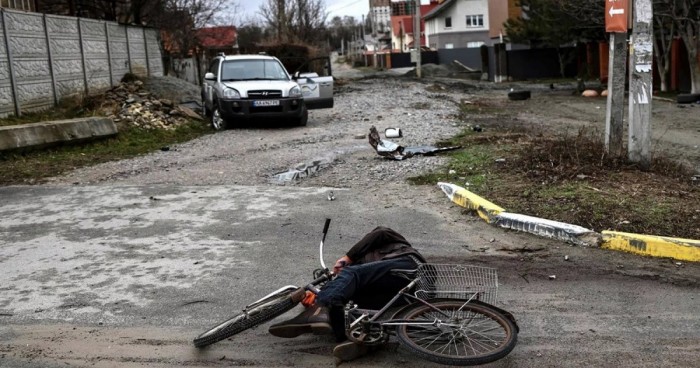 Spanish Prime Minister Pedro Sánchez said Monday he saw signs of a possible "genocide" in Ukraine after claims that Russian forces committed atrocities against Ukrainian civilians in Bucha, a town outside Kyiv.

The bodies of at least 20 men in civilian clothing were found lying on the ground in a single street on Saturday after Ukrainian forces retook the town of Bucha near Kyiv from Russian troops. Russian forces withdrew from several towns near Kyiv in recent days after Moscow's bid to encircle the capital failed, with Ukraine declaring that Bucha had been "liberated". (Photo by RONALDO SCHEMIDT / AFP)

“We will do everything to ensure that those who have perpetrated these war crimes do not go unpunished, and therefore appear before the courts… to deal with these alleged cases of (crimes against) humanity, war crimes and why not say it too, genocide,” he said.

“Putin’s unjustified aggression has brought war back to the gates of the European Union”, he told an economic forum in Madrid.

Sánchez is one of the first European Union leaders to label Russia’s actions in Ukraine a “genocide”.

Polish Prime Minister Mateusz Morawiecki on Monday also called for an international investigation into what he termed a “genocide” carried out by Russian troops in Ukraine.

Ukraine and Western leaders have erupted in outrage over the discovery of mass graves and hundreds of dead people in Bucha, a small town northwest of Kyiv.

“This is genocide. The elimination of the whole nation and the people,” Zelensky told the CBS programme Face the Nation, according to a transcript provided by the network on Sunday.

Russia denied the accusations and said Kyiv had staged footage of the corpses.