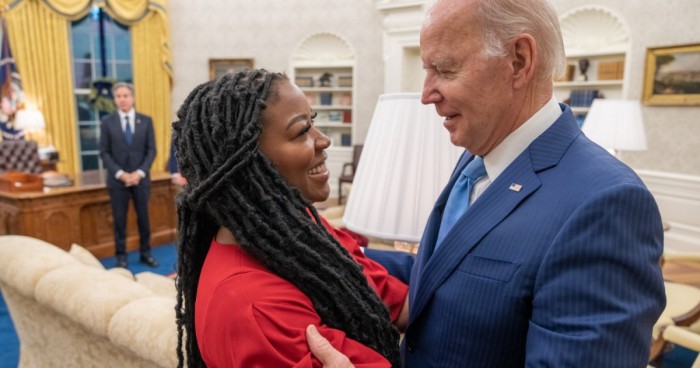 Russia has released US basketball star Brittney Griner in a prisoner exchange, authorities said, spurring messages of relief from US officials, supporters and Griner’s loved-ones who for months had pushed for her return to the United States.

Russia’s foreign ministry said she had been traded for Viktor Bout, a Russian former arms dealer jailed in the United States. The exchange took place at Abu Dhabi airport in the United Arab Emirates on Thursday, Russian news agencies reported.

US President Joe Biden said Griner, a two-time Olympic gold medalist, was “on her way home”.

“She is safe. She is on a plane. She is on her way home,” Biden wrote in a Tweet that featured a picture of him and Griner’s wife, Cherelle Griner.

Griner, 32, a star of the Phoenix Mercury at the Women’s National Basketball Association (WNBA), was arrested on February 17 at a Moscow airport when cartridges containing cannabis oil, which is banned in Russia, were found in her luggage.

Her detention came days before Russia launched a full-scale invasion of Ukraine on February 24 invasion, as ties between Washington and Moscow came under further strain. The Biden administration characterised her detention as “wrongful” early on.

Throughout her time in Russian custody, Griner’s relatives, teammates and supporters called on the US government to put its full weight behind the case to secure her release.
She was sentenced on August 4 to nine years in prison on charges of possessing and smuggling drugs. She had pleaded guilty, but said she had made an “honest mistake” and had not meant to break the law.

Her lawyers described the sentence as excessive, stressing that it does not “correspond to the gravity of the crime”, - Al Jazeera reports.
Last month she was taken to a penal colony in the Russian region of Mordovia to serve her sentence.

In a brief address at the White House on Thursday, Biden said the “past few months have been hell for Brittney” but that she was in good spirits. He praised the basketball star as an “incomparable athlete”.

“This is a day we’ve worked toward for a long time. We never stopped pushing for her release. It took painstaking and intense negotiations,” the US president said.

Dozens of US lawmakers, athletes and commentators expressed joy and gratitude for Griner’s release on Thursday.

Bout, the Russian arms dealer, was sentenced in 2012 to 25 years in a US jail after he was accused of arming rebel groups in some of the world’s bloodiest conflicts.

Moscow said it had been negotiating with Washington to secure Bout’s release “for a long time” and that initially the US had “refused dialogue” on including him in any swap.

“Nevertheless, the Russian Federation continued to actively work to rescue our compatriot. The Russian citizen has been returned to his homeland,” the defence ministry said.

Variously dubbed “the merchant of death” and “the sanctions buster” for his ability to get around arms embargoes, Bout, 55, was one of the world’s most wanted men before his arrest.

Some US Republicans criticised the swap deal on Thursday, citing Bout’s notoriety and the fact that Whelan remains jailed in Russia.