Kosovo serb barricades remain up despite calls for removal 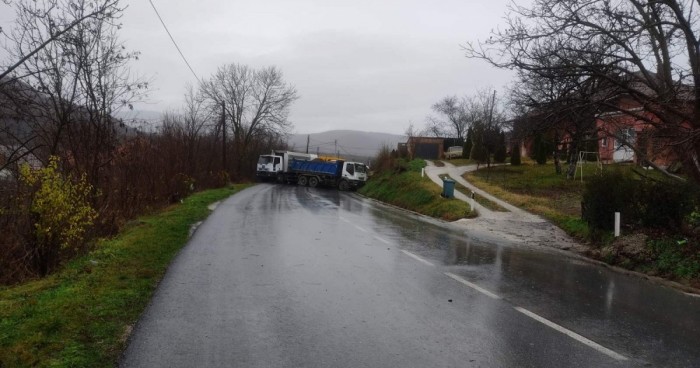 Barricades erected by local Serbs in the north of Kosovo remained up on Monday, despite calls from the US, UK and EU for them to be removed and the situation de-escalated.

Kosovo Serb barricades set up in northern Kosovo on Saturday in protest against the arrest of a former Kosovo policeman, Dejan Pantic, suspected over the attack on municipal election commission offices in North Mitrovica, remained up on Monday, despite international calls for their removal.

Local media said elementary and secondary schools in the north are also not working.

The Head of Serbia’s Office for Kosovo, Petar Petkovc, told Serbia’s public broadcaster RTS on Monday that, beside Pantic’s arrest, there are “dozens and dozens of reasons [for protests] in recent months and years that Belgrade and Serbs from the north of Kosovo and Metohija have been warning about.

“The Serbs on the barricades are sending their cry to the international community, which cannot hear them, about what is happening in Kosovo and Metohija,” Petkovic said.

The UK and US embassies in Belgrade and Pristina have both called for barricades to be removed.

“Along with the United States and the EU, we express our deep concern about the current situation in the north of Kosovo following the detention of an individual suspected of involvement in an attack on Kosovan authorities,” the embassies said in joint statement on Sunday.

“This arrest is no justification for illegal roadblocks nor threats and intimidation against the Kosovan authorities and the local population,” the statement continued.

The US embassy said that “those who erected illegal roadblocks should dismantle them immediately”.

After local Serbs erected the barricades on Saturday, Kosovo police announced that they had temporarily closed the road to the Jarinje and Bernjak crossing points with Serbia.

Interior Minister Xhelal Svecla said on Sunday that, “since yesterday afternoon (Saturday) six barricades were placed in the municipalities of Leposavic, Zvecan and Zubin Potok, therefore, for safety reasons, we closed two crossing points (with Serbia) at Jarinje and Bernjak”.

“The EU will not tolerate attacks on EULEX Kosovo or the use of violent, criminal acts in the north,” Borrell wrote on Twitter.

He was referring to an attack on a patrol of the EU rule-of-law mission on Saturday evening. EULEX said a patrol was attacked by a stun grenade near Rudare village in the north of Kosovo. EULEX said that no police officer was injured, and no material damage was caused.

“This attack, as well as the attacks on Kosovo Police officers, are unacceptable. We strongly condemn the violent acts perpetrated by armed persons in northern Kosovo, including against the international community,” EULEX said.

Serbian President Aleksandar Vucic denied that the attack on EULEX happened. “We don’t have a single indicator that confirms that there was an attack on EULEX, but attacks on EULEX and KFOR must not happen”, Vucic told RTS after a National Security Council meeting on Sunday evening.