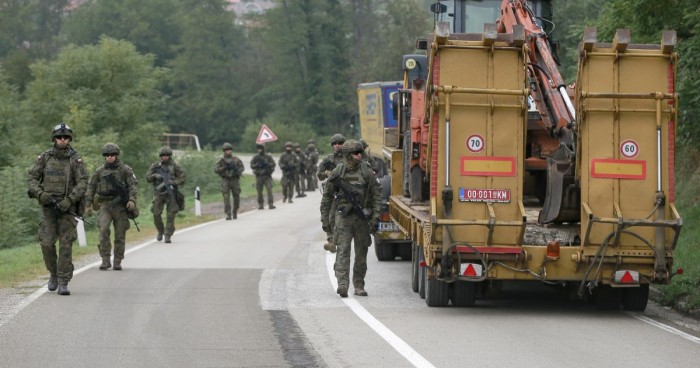 A fragile peace has been preserved in Kosovo since it declared independence from Serbia in 2008 following the 1998-99 war in which NATO intervened to protect Kosovo’s Albanian majority. Serbia does not recognize Kosovo’s independence.

In recent weeks, minority Serbs in northern Kosovo have responded with violent resistance to moves by Pristina that they see as anti-Serb.

On Saturday, Serb protesters blocked main roads after the arrest of a former Serb policeman. Kosovo police later came under small-arms fire in several locations and fired back in self defense, the force said in a news release.

Meanwhile, a stun grenade was thrown at a car belonging to EULEX, the European Union mission in Kosovo. There were no injuries.

The ex-police officer is “accused of committing terrorist acts and attacking the constitutional order,” according to Kosovar authorities, who accuse him of organizing attacks on the country’s election commission and police.

Following the flareup, the EU, the United States and NATO asked for restraint by both parties and demanded the removal of barricades.

Kosovar authorities also postponed local elections until April that were due to take place next weekend.

Serbian President Aleksandar Vucic said Saturday that Belgrade would ask KFOR to let Serbia deploy military and police in Kosovo, but acknowledged there was no chance of permission being granted.

On Sunday, Vucic said Serbia demanded the release of all arrested Serbs from northern Kosovo, but also seeks to defuse tensions in the region.

“Whenever one would think we have something solved, another problem emerges,” Vucic said.

Polish soldiers, part of a NATO peacekeeping mission in Kosovo pass through barricades near the border crossing between Kosovo and Serbia in Jarinje, Kosovo, September 28, 2021.

Why a license plate spat has sparked ethnic tensions again in northern Kosovo
Serb mayors in northern Kosovo municipalities, along with local judges and some 600 police officers, resigned last month in protest over a Kosovo government move to replace Belgrade-issued car license plates with ones issued by Pristina.

Vucic demanded the release of recently arrested Kosovo Serbs “as they are held on trumped-up charges” and the pullout of Kosovo police, in line with an EU-brokered agreement that stipulates consent of Serb mayors in the area for that.

“Kosovo police has nothing to do in the north…especially people armed…up to their teeth,” Vucic said. “That causes uneasiness and fear among the Serb population.”

Belgrade and Pristina are holding talks in Brussels to try to normalize relations and the EU has already presented a plan.