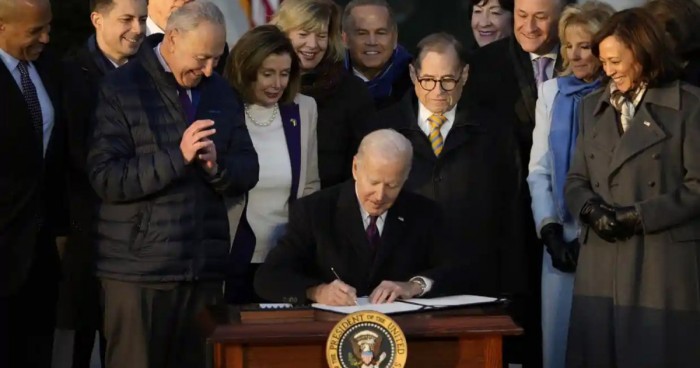 Joe Biden on Tuesday signed into law landmark legislation protecting same-sex marriages, hailing it as a step toward building a nation where “decency, dignity and love are recognized, honored and protected”.

The signing ceremony on the White House South Lawn was a celebration, with guests waving rainbow flags and performances by the Gay Men’s Chorus of Washington DC, Sam Smith and Cyndi Lauper.

President Joe Biden signs an executive order on advancing equality for LGBTQ+ individuals.
Biden signs executive order to curb anti-trans laws and conversion therapy
Read more
“This law and the love it defends strikes a blow against hate in all its forms,” Biden said, before signing the Respect for Marriage Act.

The ceremony was personal for many in attendance. The transportation secretary, Pete Buttigieg, the first openly gay cabinet member, was there. Also present was Tammy Baldwin, the Democratic senator from Wisconsin, a lead sponsor of the bill and the first openly gay member of that chamber.

The Senate majority leader, Chuck Schumer, said he was wearing the same purple tie he wore to his daughter’s wedding. Schumer’s daughter and her wife are expecting their first child next year.

“Thanks to the dogged work of many of my colleagues, my grandchild will live in a world that will respect and honor their mothers’ marriage,” the New York Democrat said, his voice catching.

There was sustained applause for the House speaker, Nancy Pelosi. The long-serving congresswoman from San Francisco, a prominent champion of LGBTQ+ rights, praised the crowd of advocates and activists for their “patriotism” and “impatience”. Pelosi, who will soon step down from Democratic leadership, said it was fitting that “one of my final acts as speaker” was to gavel down the vote protecting same-sex marriage last week.

The historic legislation protects same-sex and interracial marriages, prohibiting federal and state governments from denying the validity of a lawfully performed union on the basis of sex, race or ethnicity. The law also repeals the 1996 Defense of Marriage Act (Doma), which defined a marriage as the union between a man and a woman and denied federal benefits to same-sex couples. Though the supreme court struck down part of the law, it remained on the books.

To cheers, tears, applause and laughter, Biden turned the bill into law with the flick of his pen, surrounded by congressional leaders and LGBTQ+ members of Congress.

But Biden also acknowledged the fear that prompted Congress to act, over the conservative backlash over gender issues and alarming incidents of violence against LGBTQ+ Americans. Last month, five people were shot dead at a gay nightclub in Colorado Springs. The suspect was charged with hate crimes.

“Racism, antisemitism, homophobia, transphobia, they’re all connected,” he said. “But the antidote to hate is love.”

Biden’s signature is the culmination of a months-long scramble by a bipartisan group of lawmakers, set in motion by fear the right to same-sex marriage could be imperiled after the supreme court’s decision in June to overturn Roe v Wade, eliminating the right to abortion. In a concurring opinion, the conservative justice Clarence Thomas suggested the court should reconsider cases such as Obergefell v Hodges, the 2015 decision legalizing same-sex marriage.

Should Obergefell fall, states would not be required to issue marriage licenses for same-sex marriage. But they would now have to recognize unions performed in states where they were legal. In a concession to Republicans, the new law also includes a religious liberty exemption, allowing churches and non-profits to refuse goods, services and accommodations for same-sex marriages.

Harris also said: “The Dobbs decision reminds us that fundamental rights are interconnected, including the right to marry who you love, the right to access contraception and the right to make decisions about your own body.”

Though the bill passed the House and Senate with bipartisan support, most Republicans opposed it.

Just over 25 years ago, nearly seven in 10 Americans said marriages between same-sex couples should not be recognized by law, according to Gallup. Now almost exactly the same number – a record 71% – say same-sex unions should be legal.

Plaintiffs and lawyers who were part of major lawsuits that established rights for same-sex and interracial marriages attended the ceremony on Tuesday.

Biden’s support for LGBTQ+ rights has evolved. In 1996, as a senator, he voted for Doma. As president, he signed into law its repeal.

Biden is now considered the “most pro-equality” president. As vice-president, Biden became the highest-ranking US official to endorse same-sex marriage, announcing his position in May 2012 and prompting the then president, Barack Obama, to declare his support days later.

Before Biden spoke, attendees watched a clip from that interview, comments for which Biden joked he “got in trouble”. Paraphrasing his remarks from a decade ago, he said: “I mean this with all my heart: marriage is a simple proposition. Who do you love? And will you be loyal to that person you love? It’s not more complicated than that.”