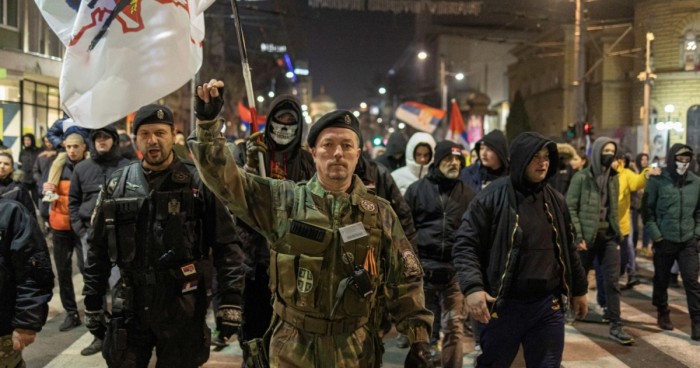 Hundreds of supporters from Serbian rightist and ultranationalist organizations, some waving Russian flags, rallied in downtown Belgrade in support of Kosovar Serbs, demanding the Serbian government intervene in Kosovo. Protesters waved flags and chanted "Kosovo is Serbia." Tempers are flaring again between Serbia and Kosovo, a former Serbian province that declared independence. Tensions have simmered ever since the 1998-99 war in Kosovo that claimed more than 10,000 lives and left over 1 million homeless.

Tensions between Serbia and Kosovo are once again in the headlines. The center of the conflict between the ethnic Serb minority and the ethnic Albanian majority of

Kosovo is the area north of the Ibar river.

North Kosovo is divided into four municipalities, whose population is almost exclusively ethnic Serb, with close ties to Serbia. Most do not recognize that Kosovo is a state. However, they have 10 guaranteed seats in Kosovo's parliament and two minister seats in the government in Pristina.

Since the end of the Kosovo war in 1999, the Kosovar government has never had full control in the north of the country — this means that the area north of the Ibar river, which has a population of about 60,000, is effectively a lawless zone and thus perfect for criminals and smugglers.

Without exception, the leading Serbian politicians in the area are loyal to Serbian President Aleksandar Vucic.

The ethnic Serbs of Kosovo distrust the government in Pristina, which is underpinned by the fact that special police units are regularly sent into the northern area, allegedly to fight crime.

What sparked the current tensions?

Now, once again, Serbs in North Kosovo are stepping up their protests, DW reports. They have organized online groups, and can bring the region to a halt within minutes, blocking roads and border crossings. Their current protest is at against the arrest of a former police officer suspected of terrorism. The Kosovo prosecutor's office accuses him of having carried out a bomb attack on the premises of the election commission in North Mitrovica.

The Serbs wanted to prevent local elections that became necessary in the north after all ethnic Serbs resigned from Kosovo's state institutions in early November. They withdrew from both parliament and government and all four mayors in North Kosovo resigned. Several hundred Serb police officers left the Kosovo police force, and Serb judges stopped going to work.

This boycott was a reaction to Kosovo Prime Minister Albin Kurti's plan to introduce new license plate regulations: The aim was to ban plates issued by the Serbian authorities and to swap them for Kosovo plates. As far as Kurti was concerned, it was a matter of principle because Serbia does not accept Kosovo license plates. For Serbian President Aleksandar Vucic and the Kosovo Serbs, it was preparation for "ethnic cleansing."

The introduction of new license plates has been put on hold for now, as have the local elections, as a result of pressure from the EU and the United States.

The West has also called on Serbia to help ease tensions.

Though it is unlikely that Serbia would actually deploy them, Vucic has put troops on "heightened readiness" several times in recent years. This month, Belgrade said it was close to asking for security forces to be stationed on the territory of Kosovo.

That is a possibility provided for in UN Security Council Resolution 1244 adopted in 1999, after a de facto surrender by Serbia. It allows for a few hundred law enforcement officers to be sent to Kosovo — but only if the KFOR international peacekeeping mission agrees.

Even Vucic has openly admitted that his proposal will probably be rejected and according to analysts, he is engaging in propaganda. His critics argue that he wants to distinguish himself as a champion of "all that is Serb." Observers say that even if he were to seriously consider the military option, it would be futile because it would lead to a direct confrontation with the international police and military units stationed in Kosovo.

Is a solution to the conflict in sight?

Even with more pressure from the West, there is little hope for resolution. The positions are firmly entrenched on both sides: Belgrade will "never" recognize the independence of Kosovo,which it says violates international law, while Pristina says that talks with the former "Serb occupiers" would only make sense if they led to this recognition.

More than 100 countries, including 22 EU member states, recognize Kosovo as an independent state. Kosovo needs Serb approval to become a UN member — because Russia and China, which are both partners of Serbia, have veto power on the Security Council.

France and Germany have put forward a proposal to reach a deal on the status of Kosovo, but so far details are scant. According to insiders, it will be based on the Basic Treaty of 1972 between the Federal Republic of Germany and the German Democratic Republic — Serbia would not have to recognize Kosovo explicitly, but it would have to accept its territorial integrity and sovereignty and not actively block its membership in all international organizations.

The carrot for both sides would be the prospect of joining the EU eventually. Serbia has officially applied to join the bloc but negotiations have been sluggish. Kosovo is not yet a candidate but plans to apply for accession before the end of the year.

What is the impact of the war in Ukraine?

Since February, there has been concern that Russia could use its close ties with Serbia to open a "second front" in the Balkans. Kosovo Prime Minister Kurti has suggested that Serbia, like Russia, also dreams of restoring a "Serbian world" in the region. For his part, Serbian President Vucic has said that Kurti is conducting himself like a "little Zelenskiyy."

The cards are clearly stacked against Vucic. To the EU's annoyance, Serbia has not joined the sanctions against Russia. According to polls, over 80% of Serbs reject imposing these on a "brother state." Serbia is not only dependent on Russian gas, but also on Russian support in the Kosovo issue.

Yet much of the Serbian economy is oriented toward the West. German companies in Serbia provide for about 75,000 jobs. Western politicians, including German Chancellor Olaf Scholz, seem determined to curb Russian influence in the Balkans.

Kurti has said that a "comprehensive normalization agreement" between Serbia and Kosovo is expected in spring 2023. As things stand at the moment, that sounds overly optimistic.