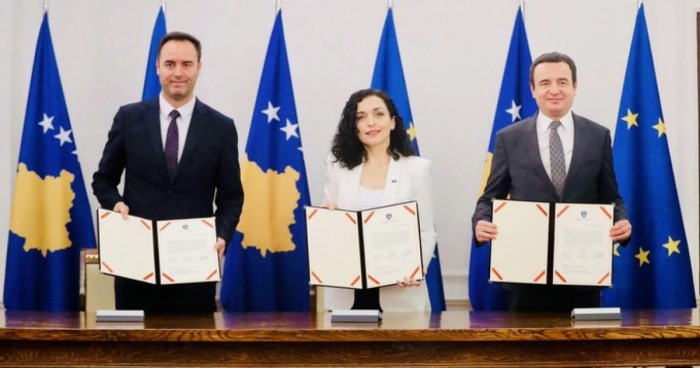 Kosovo's Prime Minister Albin Kurti on Thursday submitted an application for Kosovo to join the European Union, formally kicking off a process that could take years, and depends on normalizing relations with neighboring Serbia, - reports DW.

"This is a historic day for the people of Kosovo and a great day for democracy in Europe," Kurti told reporters in Prague.

Kosovo is the last western Balkan country to apply for EU membership after Brussels recognized Bosnia's candidate status earlier in the week, with European government leaders ratifying that decision as expected on Thursday.

The EU recently reiterated its commitment to the Western Balkans' enlargement process at a summit in Tirana, while Russia's war in Ukraine underscores the importance for Europeans of stabilizing the volatile region.

Albanian-majority Kosovo declared independence from Serbia in 2008 with the backing of the West, following a 1998-1999 war in which NATO intervened to protect the territory.

Kosovo's independence is recognized by around 110 countries. However, Belgrade along with its key allies Russia and China still considers it a part of Serbia, so Kosovo is not a member of the United Nations.

But crucially for Kosovo's hopes of joining the bloc, five EU members — Greece, Spain, Romania, Slovakia and Cyprus — also do not recognize Kosovo as an independent state, usually owing to fears about comparable independence movements within their own borders.

Normalizing relations with Belgrade will be imperative for Kosovo's bid. Despite the EU-sponsored dialogue between Pristina and Belgrade, the two neighbors have been at odds for decades.

Belgrade encourages the Serb majority in northern Kosovo to defy Pristina's authority and the region saw an escalation of violence recently — including shootings and explosions.

EU and US envoys this week called on Kosovo and Serbia to remain calm amid an ongoing ethnic crisis in the north of Kosovo where local Serbs have erected barricades to prevent police movement, part of tensions between authorities and Kosovo's Serb minority.