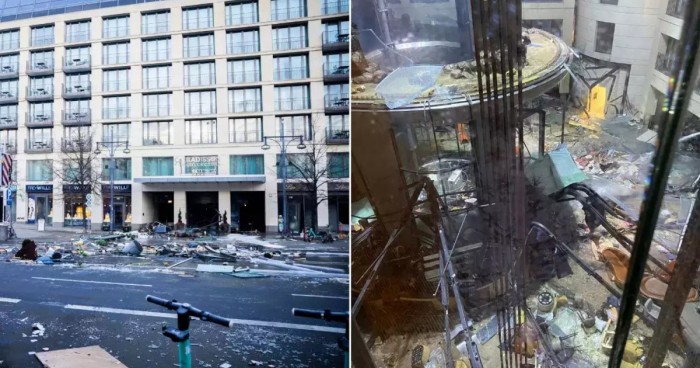 A social media user claiming to be a guest at the hotel shared a video showing the shattered aquarium, writing that "the fish tank of my hotel just exploded in the middle of the night."

"The tank in our hotel...blew?" wrote another on Twitter, sharing an image of the destruction.

Local media—such as RBB and DW—have confirmed the incident, reporting that police said a blast was heard around 5:45 a.m. local time at the tourist attraction and parts of the Radisson's facade where the aquarium was located flew onto the streets.

Berlin's traffic agency VIZ reported an "extremely large volume of water" spilling over into the street outside the hotel, according to DW. The Associated Press reported that one million liters (about 265,000 gallons) of water poured out of the aquarium.

Police said there had been "incredible" damage. Video showed an empty tank with water pouring into the hotel lobby.

Guests have been moved out of the hotel following the incident at 05:50 (04:50 GMT).
A spokesman for Berlin's fire brigade told the BBC the vast majority of the fish had died, and the cold weather had made rescue attempts more difficult. The tank had contained more than 100 different species.

Outside the Radisson Blu, a pile of debris lay in front of what were the front doors, which now hang into the street - twisted at an angle by the force of the exploding tank.

Paul Maletzki was staying on the fourth floor with his girlfriend.
He described being woken up by a loud bang and shaking. When he looked down into the lobby, he saw water flowing across it. They and other guests were later escorted out of the hotel by armed police.

The Mayor of Berlin Franziska Giffey went to the hotel to see the damage and described the tank burst as being like a tsunami.

She expressed relief it had happened so early in the morning - saying an hour or so later, and the lobby and street outside would have been busy with visitors, many of them children.
Sandra Weeser, a member of the German federal parliament who had been staying at the hotel, told local television that she had been woken up by "a kind of shock wave" and described the scene outside the hotel as a "picture of devastation".
She said fish which may have been saved had frozen to death and recalled seeing a "large parrotfish lying on the ground, frozen".

The aquarium was modernised two years ago, and there is a clear-walled lift built inside for use by visitors. Some of the rooms in the hotel are advertised as having views of it.
Berlin's fire brigade said more than 100 firefighters were sent to the scene and it was not clear what caused the break.

It said it used rescue dogs to check the area inside the hotel for anyone potentially injured, with nobody found.

Police said "massive amounts" of water was flowing into nearby streets and people in the area should drive cautiously.

A police source told local media there is no evidence the break was the result of a targeted attack.

But there has been speculation that freezing temperature - which dropped as low as -6C overnight - may have caused a crack in the tank.

Berlin's public transport authority said Karl-Liebknecht street outside the hotel had been closed off due to "an extreme amount of water on the road". Trams service in the area was also stopped.

AquaDom was opened in December 2003 and was given the Guinness World Record for being the world's largest cylindrical aquarium.
According to reports at the time of its construction, it cost about €12.8m (£11.2m) to build.