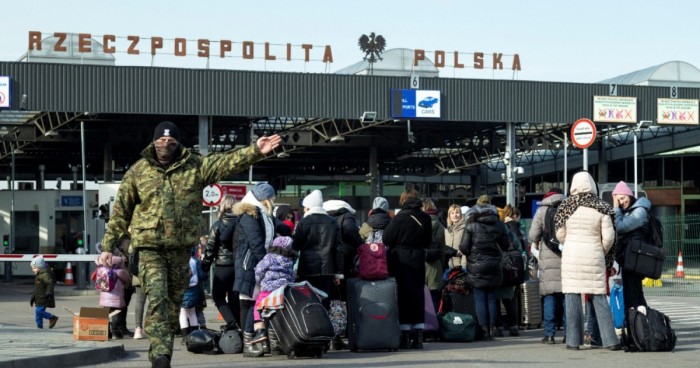 People fleeing Ukraine arrive at the Berlin Hauptbahnhof on every train from Warsaw, volunteers say. Sometimes seven, sometimes 20, sometimes more — but always, there are people. The volunteers, in safety vests, wait for them at the edges of the platform. They find the ones wearing winter coats on a mild October day, the ones trying to balance rolling suitcases and overstuffed backpacks and the cats they didn’t want to leave behind. The scene repeats throughout the day, so by the end, dozens and dozens have passed through the train station in Berlin.

That number is on top of the more than 1 million who’ve already made their way into Germany, and the more than 4.8 million Ukrainians who have registered as refugees in Europe since February. In total, nearly 8 million people have fled the country; another 6.5 million have moved within Ukraine. It is the spillover of months and months of military conflict, a humanitarian tragedy that has gotten quieter but never stopped.

Russia’s invasion of Ukraine created the fastest and one of the largest displacements of people since World War II. Civil society and aid organizations immediately stepped up: strollers and winter coats and hot food at train stations, citizens offering up their basements and spare bedrooms. The European Union, too, mounted an unprecedented response, granting temporary protection to most people fleeing Ukraine. The mechanism bypassed EU countries’ traditional asylum processes and granted Ukrainian arrivals immediate residency rights and access to the labor market, among other benefits, for at least one year, but potentially longer.

Now, as the crisis in Ukraine inches closer to the year mark, the situation in Ukraine — and across Europe — is entering a new, unpredictable phase. Organizations, volunteers, and local governments are stretching to support Ukrainians already in Europe, as they prepare for the potential of more arrivals this winter.

In the summer and early fall, with fighting mostly concentrated in the Donbas, Ukrainian arrivals to Europe slowed, and more traffic began moving in the opposite direction, as Ukrainians returned. But this fall, Moscow unleashed a series of all-out assaults on Ukraine from the sky, targeting civilian and energy infrastructure. The Ukrainian government says about 50 percent of its infrastructure is now damaged, and the entire country is facing dangerous disruptions to electricity, heat, and water as it gets colder. The Ukrainian government warned citizens who have already sought refuge abroad not to return.

The violence reversed the summer’s trend, and once again, more people are leaving Ukraine than going back, though it’s nowhere close to the numbers in the first days of the invasion. And those who perhaps thought of returning — to see their family or check on their homes — are now planning to stay in host countries.

The continent has, so far, absorbed millions, with countries like Poland and Germany among those who’ve registered the most arrivals. Local governments are scrambling to find accommodations for refugees. Access to housing is a major challenge, but so is finding employment and child care. Some organizations also say donations and support are way down. Some volunteers, stressed by energy bills and unprepared for the length of the crisis, are unable to keep housing Ukrainian guests.

The fallout from the Ukraine crisis is also straining European economies, with high inflation and an energy crisis that threatens to tip the region into a recession. There are signs of some fatigue with the bloc’s generosity, and these pressures threaten to fracture public and political solidarity.

“The war is unfortunately not anywhere close to ending and needs remain substantial, so the support for people fleeing Ukraine is going to remain, and it’s going to need to be scaled up and need to continue,” said Niamh Nic Carthaigh, director of EU policy and advocacy with the International Rescue Committee.

How the European Union responded to Ukrainian refugees
In early March, just days into Russia’s Ukraine invasion, the European Union adopted temporary protection for Ukrainian nationals and some others fleeing military crisis in Ukraine. The mechanism was shaped during crisis in the Balkans, when European governments also had to prepare for a rush of people escaping conflict.