EUTOP.news > Andrew > Six of the Best Christmas Markets in Europe to visit this winter 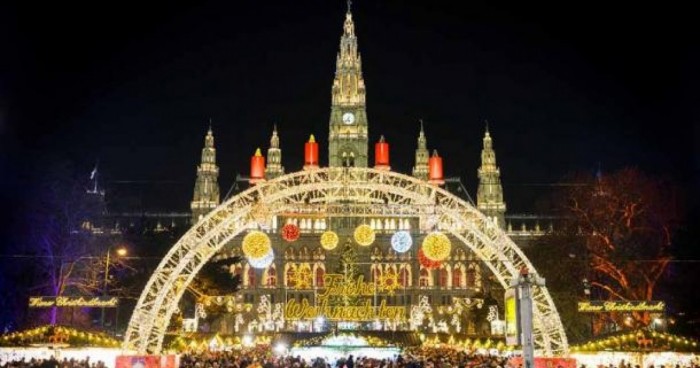 If you visit any large European town or city during December, there’s a very good chance you’ll see a Christmas market. The traditional Christmas market is a centuries-old European tradition, and it really isn’t Christmas without visiting one. Renowned for their delicious food, festive atmospheres, and great gift-buying potential, what’s not to love? The only downside is there are so many, it can be a little difficult to choose which one to visit. That’s why we’ve created a list of the oldest and most authentic Christmas markets in Europe.

1. Striezelmarkt, Dresden, Germany
One has to be careful when looking for the ‘oldest’ Christmas market in Europe. As Christmas markets have become increasingly lucrative tourist attractions, more and more cities have claimed their markets to be the oldest.

Striezelmarkt in Dresden is one of the first genuine Christmas markets in the world and is widely reported to be the oldest surviving one. It first appeared in historical records in 1435 and recently celebrated its 585th anniversary. These days, it has around 240 stands and brings in more than three million visitors every year, lasting from the beginning of the advent season, December 1st, until Christmas Eve.

Striezelmarkt started out as a one day market under Friedrich II, Elector of Saxony. It was held on the Monday before Christmas in Dresden’s Altmarkt square. Its original purpose was to provide Dresden’s citizens with meat ready for the indulgences that followed the end of Advent’s traditional fast. The market takes its name from the word stroczel, which is a kind of cake sold at the market that is now known as Stollen or Christstollen.

The market today is very different from its original incarnation. It has spread to the point where it now takes over much of the city's center. It is now most famous for having the world’s largest usable Christmas arch and the Erzgebirge Christmas pyramid. Other popular attractions include a children’s adventure world, a puppet theater , a merry-go-round, and even a miniature railway.

At the market's center stands a 66 foot (20 meter) high spruce, traditionally brought in from the nearby Tharandt woods. At the back of the market is a painted wooden castle that acts as a giant advent calendar. Every day a different door is opened and a puppet show is put on.

Of course, the main attraction is the wares sold at the various stores. These include wooden ornaments, candle pyramids, and nutcrackers. Local delicacies specific to Dresden such as pflaumentoffel (figures made from prunes), pulsnitz gingerbread, and gluhwein ( mulled wine ) are available.

Its name is Alsatian, an Alemannic German dialect that is still spoken by 43% of adults in the Alsace region. While the name Christkindelsmarik dates back to 1570, there is some evidence that shows the market may indeed be older than its Dresden cousin.

Records show that as far back as the late 12th century, Strasbourg was holding a Klausenmarik ( Saint Nicholas Market). This market was traditionally held on December 6th each year, until Alsace switched to Protestantism. After that point, it became the Christkindelsmarik. The reason for the change in branding? Preacher Johannes Flinner abolished the old name to hide all references to Catholicism.

Christkindelsmarik was originally held over the three days leading up to Christmas Eve at Place de la Cathédrale. However, as time progressed, the market spread out. By the beginning of the 19th century, the market had doubled in length to six days, and by the mid-19th century, it was being held for thirty six days! It became so popular that in the 19th and 20th centuries that local traders attempted to have the market reduced in size, claiming unfair competition.

Today, it is primarily held in the center of Grande Île in Strasbourg, which is a UNESCO World Heritage Site . The market has more than 300 stalls that sell handmade items, Christmas decorations, and regional produce. The central Christmas tree usually tops 98 feet (30 meters) high, dwarfing its surroundings.

While most Christmas markets are heavily German-inspired, Christkindselsmarik takes it one step further. Strasbourg was once part of the German Rhineland, known for its strong Christmas traditions. Despite coming under French rule, the area has lost none of these Alsatian Christmas traditions.

The first Christmas markets could be found in Vienna as far back as 1296 when its ruler, Albrecht I, gave Vienna’s citizens permission to hold a December market, known as a Krippenmarkt. Much like the other entries on this list, the market today is almost unrecognizable from its original incarnation.

While Vienna Christmas World is the city's most famous Christmas market, it isn’t its only one, not by a long stretch. Every year, Vienna holds twenty individual Christmas markets across the city, most of which are located outside the city's iconic landmarks such as the Maria Theresien Square, Schonbrunn Palace, and the university campus.

The most commonly referenced piece of evidence is a box of coniferous wood which has "Regina Susanna Harßdörfferin from the virgin Susanna Eleonora Erbsin (or Elbsin) sent to the Kindles-Marck in 1628" inscribed on the bottom. This would date the market back to the 17th century.

Historians believe the market began life as a normal weekly market between 1610 and 1639 that then morphed into an independent Christmas market. Traditionally, the market opened on December 4th, but like others, it began earlier and earlier as it became more popular.
Today, the market starts on the Friday before Advent’s First Sunday and runs up to Christmas Eve. Every year, the market starts with a parade involving the ‘ Christ Child ,’ the region's traditional gift giver, who is played by a local child.

Every year, more than two million visitors flock to the market. Stalls specialize in offering the Franconian region’s specialties, which include clothing made from the region's famous wool, brandies, preserves, gingerbread, and spekulatius almond cookies.

5. Christkindlmarkt at Marienplatz, Munich, Germany
The Munich Christmas Festival is one of the oldest and most popular Christmas markets in Germany. In its current guise, Christkindlmarkt, it dates back to 1806, but its origins lay much further back.

The Christmas market was first documented in 1310, when it was known as Nikolaimarkt, taking its name from Saint Nicholas. It has gone through many changes since then. In the town annals of 1642, it was recorded as Saint Nicholas’s Market and was held at Frauenkirche (Church of Our Lady). In 1806, its name was changed to Christkindlmarkt, although it's unclear why, and was moved to the city center on the Marienplatz.
Today, the market hosts around 140 stalls and brings in upwards of three million visitors every year. Like most other Christmas markets, this one boasts a gigantic 98 foot (30 meter) high tree each year. The tree is traditionally donated to the people of Munich by the citizens of a different town from either Austria or Italy. In return, the municipality from which the tree came is invited to hold a stand in the inner courtyard of the town hall where they operate a gluhwein (mulled wine) stall.

The numerous wooden stalls, heavily decorated with lights, garlands, and ornaments sell local treats such as roast chestnuts, stolen, mulled wine, and local German delicacies. Over the years the main Christkindlmarkt has become quite overcrowded, but do not fear. Much like Vienna, Munich hosts several other popular Christmas markets.

6. Weihnachtsmarkt, Frankfurt, Germany
The people of Frankfurt are very proud when it comes to the history of their local Christmas market, Weihnachsmarkt. The earliest mention of the market dates back to 1393 and comes from official documentation from the time.

The market was originally accompanied by the performance of ecclesiastical mystery plays, which were supposedly based on a historical encounter that happened in 941 AD. The play revolves around the story of King Otto the Great and his brother, Heinrich. The two had been estranged for many years, but were reconciled when Heinrich dropped to his knees before Otto outside the chapel after Christmas Mass. The moving scene was turned into a play to celebrate the spirit of Christmas and coming together.

In 1498, the market saw a grand parade of horses and riders over 1,000 strong when the local landgrave (count) married the daughter of the electoral prince of Palatinate. The prince’s entourage traveled through the market to reach the wedding venue at Frankfurt am Main.

Originally, the Frankfurt Christmas market was pretty much closed off to outsiders who weren’t welcome. This gave the Weihnachsmarkt a uniquely Frankfurt flair. The market was particularly famous for its handcrafted toys, with wooden wagons and soft toys being the most popular. Well into the late 19th century, it was common for Frankfurt parents to buy their children's Christmas gifts from the market and nowhere else.

The most recent addition to the market was in the mid-20th century. The peculiar custom of giant Santa Clauses made its way to Frankfurt. These are giant, 6 foot (2 meter) tall gingerbread figures. Local private school students raised the money to produce the figures which they then gave to their teachers. The children and teachers alike delighted in devouring the giant gingerbread figures and it became a tradition.