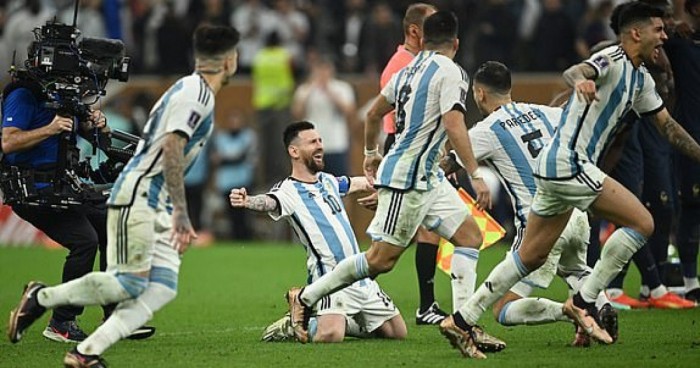 Argentina's players are now all singing Muchachos in front of their fans. Pure, unfiltered, unhinged joy.

Macron is on the pitch. He's just tried to console Mbappe, who really didn't want consoling.

Argentina have won the World Cup for the first time since 1986!
Messi finally gets the trophy he's so sorely desired, joining Maradona in Argentinian folklore.
France are denied the chance to become the first team in 60 years to repeat as champions.

"It was a consecration, the spiritual overtones entirely appropriate. Lionel Messi not only emulated the deity of Argentinian football, Diego Maradona, by leading the nation to World Cup glory; he finally plugged the burning gap on his CV, winning the one title that has eluded him – at the fifth time of asking, surely the last time. In the process he gilded his claim to being recognised as the greatest player of them all", - says Guardian's David Hythner

Argentina had to win this final three times, France refusing to accept it was Messi’s destiny to get his hands on the iconic gold trophy, that it was somehow preordained. It will go down as surely the finest World Cup final of all time, the most pulsating, one of the greatest games in history because of how Kylian Mbappé hauled France up off the canvas towards the end of normal time.