EUTOP.news > Andrew > UK set for ruling on plan to deport migrants to Rwanda

UK set for ruling on plan to deport migrants to Rwanda 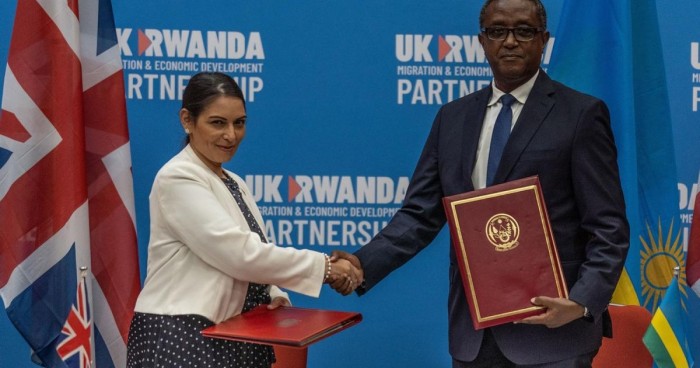 UK high court judges are on Monday December 19 due to rule on challenges to the British government’s controversial policy of deporting migrants and asylum seekers to Rwanda.

Irregular migration is a thorny political issue for the UK government, which promised to tighten borders after the country left the EU, - Media state.

It is currently grappling with how to deal with a record number of more than 40 000 migrants who have crossed the Channel from its European neighbours in small boats this year alone.

In a bid to deal with the unprecedented number of arrivals, former prime minister Boris Johnson‘s Conservative government in April announced a scheme to deport migrants thousands of miles away to Rwanda, provoking a storm of outrage.

According to the arrangement, the British government had hoped to send anyone entering the UK illegally, as well as those who have arrived illegally since January 1, to Rwanda. But deportation flights were stymied by a series of legal challenges in the UK courts and at the European Court of Human Rights.

A first flight of a small group of asylum seekers had been due to take off from the UK in June but it was halted following a last-minute injunction by the European Court of Human Rights in Strasbourg.

In the UK, one court challenge was brought by individual asylum seekers, the PCS union whose members would have to implement the removals, and migrant support groups Care4Calais and Detention Action.

Before the first full hearing of that challenge in September, PCS general secretary Mark Serwotka said sending asylum seekers to Rwanda was “not only immoral and unlawful — our members tell us it’s unworkable too”.

Lawyers for the parties argued that the policy was unlawful on multiple grounds including the assessment of Rwanda as a safe third country.

A second challenge was brought by the charity Asylum Aid.

Johnson defended the policy as vital to resolving the problem of “illegal cross-Channel trafficking of people whose lives are being put at risk by the gangs”.

Four people died last week after a small boat packed with migrants capsized in the Channel in freezing weather conditions.

After Johnson was ousted, both his successors as party leader and prime minister — first Liz Truss and then Rishi Sunak — pledged to continue the policy.

Sunak’s Home Secretary Suella Braverman has said it is her “dream” to finally see a plane carrying migrants take off for Kigali.

In an interview published on Saturday, Braverman suggested that the European Convention on Human Rights and the UN refugee convention, both of which have thrown up obstacles to the Rwanda policy, were outdated when dealing with modern-day migration.

“There are legitimate questions about whether that international framework is fit for purpose when we’re seeing a global migration crisis,” she told The Times daily.

Such conventions and international agreements had been struck in the aftermath of World War II and “designed for a world where travel was not cheap, numbers were much lower, flows of people were much smaller”, she said, adding that the government was pursuing similar agreements to the Rwanda one with other countries.

Justices are due to give judgments in both challenges before the court on Monday. — Agence France-Presse