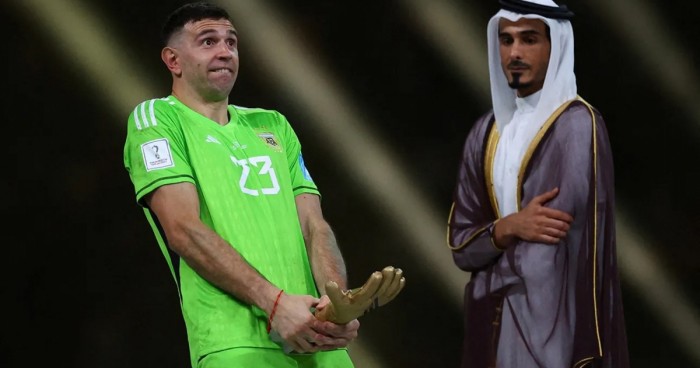 Argentina goalkeeper Emiliano Martinez made a couple of heroic stops during the team’s win over France in the World Cup final with the biggest one coming during the penalty shootout.

Martinez was awarded the Golden Glove trophy, which is given to the most outstanding goalkeeper of the tournament. Martinez had three clean sheets in the tournament. He was the first player from South America and the first to represent Argentina to win the award.

However, he may have caused a bit of a stir when he celebrated winning the trophy.

The 30-year-old member of the English Premier League’s Aston Villa was seen walking off the stage in the middle of the field and putting the trophy near his groin area. It’s unclear what compelled him to make the gesture and whether he will face a fine or other punishment for it.

Martinez has been playing professionally since he was 18. He got his start in England’s League Two at Oxford United and then moved to Sheffield Wednesday in the championship before finally moving to Arsenal for four matches in the Premier League in the 2014-15 season.