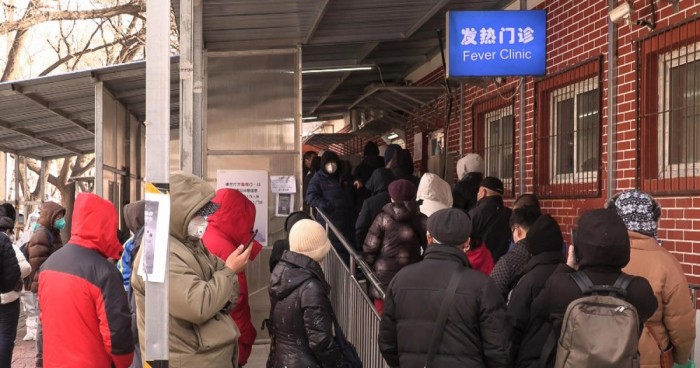 China’s abrupt and under-prepared exit from zero-Covid could lead to nearly 1 million deaths, according to a new study, as the country braces for an unprecedented wave of infections spreading out from its biggest cities to its vast rural areas, - CNN reports.

For nearly three years, the Chinese government has used strict lockdowns, centralized quarantines, mass testing and rigorous contact tracing to curb the spread of the virus. That costly strategy was abandoned earlier this month, following an explosion of protests across the country against stringent restrictions that have upended businesses and daily life.

But experts have warned that the country is poorly prepared for such a drastic exit, having fallen short on bolstering the elderly vaccination rate, upping surge and intensive care capacity in hospitals, and stockpiling antiviral medications.

Under the current conditions, a nationwide reopening could result in up to 684 deaths per million people, according to the projections by three professors at the University of Hong Kong.

Given China’s population of 1.4 billion people, that would amount to 964,400 deaths.

The surge of infections would “likely overload many local health systems across the country,” said the research paper, released last week on the Medrxiv preprint server and which has yet to undergo peer review.

Simultaneously lifting restrictions in all provinces would lead to hospitalization demands 1.5 to 2.5 times of surge hospital capacity, according to the study.

But this worst case scenario could be avoided if China rapidly rolls out booster shots and antiviral drugs.

With fourth-dose vaccination coverage of 85% and antiviral coverage of 60%, the death toll can be reduced by 26% to 35%, according to the study, which is funded partly by the Chinese Center for Disease Control and Prevention (CDC) and the Hong Kong government.

On Monday, Chinese health authorities announced two Covid deaths, both in the capital Beijing, which is grappling with its worst outbreak since the start of the pandemic.

They were the first officially reported deaths since the dramatic easing of restrictions on December 7, although Chinese social media posts have pointed to a surge in demand at Beijing’s funeral homes and crematoriums in recent weeks.

An employee at a funeral home on the outskirts of Beijing told CNN they were swamped by the long queues for cremation, and customers would need to wait until at least the next day to cremate their loved ones.

On Baidu, China’s dominant online search engine, searches for “funeral homes” by Beijing residents have hit a record high since the pandemic began.

Other major cities are also facing a surge in infections. In the financial hub of Shanghai, schools have moved most classes online starting from Monday. In the southern metropolis of Guangzhou, authorities have told students that are already taking online classes and pre-schoolers not to prepare for a return to school.

In the megacity of Chongqing in the southwest, authorities announced on Sunday that public sector workers testing positive for Covid can go to work “as normal” – a remarkable turnaround for a city that only weeks ago had been in the throes of a mass lockdown.

It is difficult to judge the true scale of the outbreak by official numbers. China stopped reporting asymptomatic cases last week, conceding it was no longer possible to track the actual number of infections. These asymptomatic cases used to account for the bulk of the country’s official caseload. But the rest of the case count has been rendered meaningless too, as cities roll back mass testing and allow people to use antigen tests and isolate at home.

Chinese experts have warned that the worst is yet to come. Wu Zunyou, the chief epidemiologist at the Chinese CDC, said the country is being hit by the first of three expected waves of infections this winter.

Speaking at a conference in Beijing on Saturday, Wu said the current wave would run until mid-January. The second wave is expected to last from late January to mid-February next year, triggered by the mass travel ahead of the Lunar New Year holiday, which falls on January 21.

Every year, hundreds of millions of people who have left their hometowns to build a life in China’s fast growing cities pour into trains, buses and planes to see their family – a weeks-long travel rush known as the largest annual human migration on Earth.

For three consecutive years, these homecoming trips have been discouraged by authorities under the zero-Covid policy. And experts warn that with domestic travel restrictions lifted, the virus could sweep through China’s countryside, where vaccination rates are lower and medical resources are lacking.

A third wave of cases would run from late February to mid-March as people returned to work after the week-long holiday, Wu said.