Boozy Santas block road with their tank. Yep, their tank 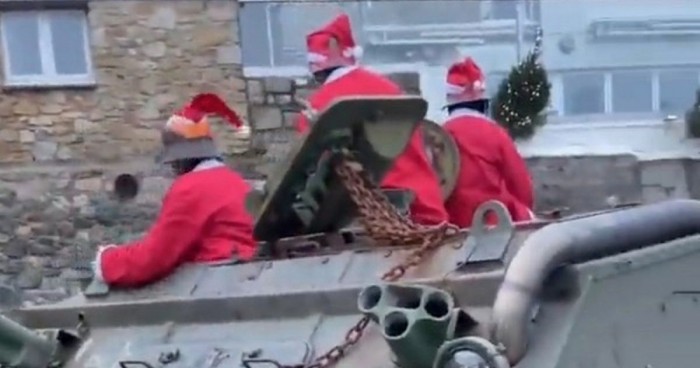 There was hell-up in a small Cornish village when a group of Santas tried to drive a tank through and got stuck - damaging a car and blocking access to the famously decorated streets. Residents and festive revellers in Angarrack were left fuming when a group of military re-enactors dressed as Santa Claus drove into the village outside Hayle in a vintage armoured personnel carrier but came a cropper when the metal beast, complete with tank tracks, proved too wide for the roads, — reports Cornwall Live.

Several punters have filmed the unusual yet rather comical scene which shows the Santas, some of them seemingly well into their festive drinks, struggling to move their Army vehicle and being told off for trying to drive it through the narrow streets of the village, which is famous for its Christmas lights.

A group of boozy Santas found themselves on the naughty list when they tried to drive a tank through a tiny festive village.
Several punters filmed the Santas behaving badly after they seemingly enjoyed too much 'Christmas spirits.'

Residents were fuming when the enormous metal beast got stuck and blocked access to their famously decorated streets.
The group of military re-enactors descended upon the quaint Cornish village dressed as Santa Claus in a vintage armoured personnel carrier.
Comical scenes show the Santas struggling to move their Army vehicle and being told off for trying to drive down the narrow streets.
Some of the group can be heard slurring their words and gesticulating wildly when the tank got stuck in the village of Angarrack.

A traffic warden can be heard giving the Santas a good telling off and insisting they can't go any futher, report local medias.

"You cannot come in with your tank, there are cars parked there. You are not going to get through," traffic warden told the tank driver pointing towards the village centre.

Another Santa tried to argue but appears to drunk, while the driver then tells the traffic warden they are allowed into the village.

Christmas lovers visiting the village to enjoy its festive lights saw the funny side of the chaos caused by the Santa 'takeover.'

Some admitted that it was ‘quite eventful’.