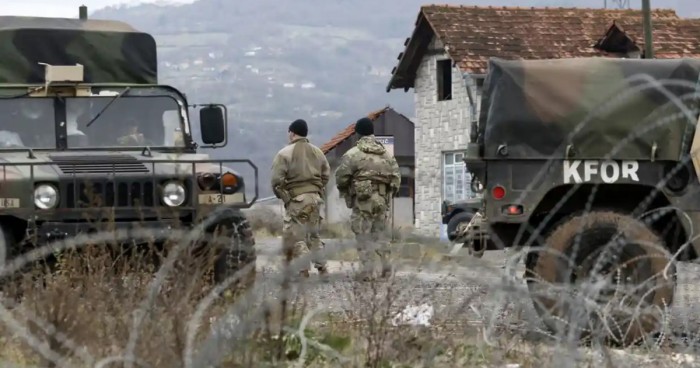 Gunshots were fired in an area in northern Kosovo where NATO troops were patrolling on Sunday, officials with the trans-Atlantic military alliance said.

While no injuries were reported, the incident comes at a time of heightened ethnic tensions in the region between local Serbs and Kosovar authorities. The spat initially began over Kosovo banning Serbian license plates.

NATO's mission in Kosovo, KFOR, confirmed that shots were fired in the area of Zubin Potok, close to the border with Serbia.

KFOR said in a statement that the NATO patrol vehicle was undamaged and there were no injuries.

Further details on the shooting were unclear. NATO did not comment on where the shots came from. NATO has bolstered its presence in northern Kosovo to maintain the fragile peace, with over 3,700 troops in the country.

Earlier on Sunday, some Serbian media reported that "fighting" had broken out after Kosovar authorities attempted to dismantle a barricade erected by local Serbs. Kosovo's police denied the account in a statement on their Facebook page, saying that their officers had not been involved in clashes.

Serbian President Aleksandar Vucic dispatched the army chief on Sunday night to the border with Kosovo, General Milan Mojsilovic himself announced, as strained relations between the two countries were exacerbated by recent blockades.

"The situation there is complicated and complex," the Serbian army chief said in an interview with local news channel Pink TV on Sunday.

"It requires in the coming period the presence of the Serbian army along the administrative line," he said, using the term Belgrade uses for the border with Kosovo.

The general added that he was on his way to Raska, a town about 10 kilometres (six miles) from the border with Kosovo after meeting with Vucic in Belgrade.

"The tasks the Serbian army has got ... are precise, clear, and will be fully implemented," Mojsilovic said.