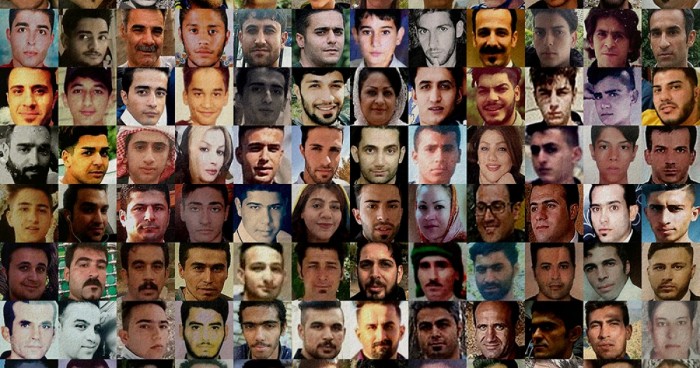 More than 500 protesters, including 69 children, have been killed, according to the Human Rights Activists' News Agency (HRANA). Two protesters have been executed and at least 26 others face the same fate, after what Amnesty International calls "sham trials".

A hundred days after they began, the longest running anti-government protests in Iran since the 1979 Islamic revolution have shaken the regime, but at a heavy cost to the people.

Although nationwide demonstrations have swept Iran before - once in 2017 lasting until early 2018, and another in November 2019 - the current protests are unique, as they involve people from across society and women are taking a lead role under the slogan "Woman, Life, Freedom". Some Iranian celebrities have taken irrevocable steps to support protests, leading to their arrest or exile.

Taraneh Alidoosti, a well-known Iranian actress, is being held in the notorious Evin prison after she condemned the execution of a young protester. Previously, she published a photo of herself without a mandatory headscarf, holding a sign with the protesters' slogan.

"I have worked with Taraneh on four films and now she is in prison for her rightful support of her fellow countrymen and her opposition to the unjust sentences being issued," Asghar Farhadi, who directed Alidoosti in his Oscar-winning film The Salesman, wrote on Instagram.
"If showing such support is a crime, then tens of millions of people of this land are criminals," Mr Farhadi added.

Another prominent Iranian actress who has left the country, Pegah Ahangarani, told BBC Persian: "Both sides have been radicalised, the regime in its crackdown and people in film industry in their response.

"Iran cannot go back to pre-Mahsa Amini era," referring to the Kurdish Iranian woman whose death in the custody of Iran's morality police on 16 September sparked the protests.

Hamid Farrokhnezhad, another well-known Iranian actor, moved to the US earlier this month and immediately called Iranian Supreme Leader Ali Khamenei a "dictator", comparing him to Franco, Stalin and Mussolini.

Ali Karimi, one of Iran's most celebrated former footballers, who was living in Dubai, also supported the protests. He said Iranian intelligence agents threatened to kill him, eventually leading him to move to the US.

Karimi is now one of the most outspoken critics of the Iranian regime on his Instagram account, with more than 14 million followers.

Another Iranian football icon, Ali Daei, had his jewellery shop and restaurant shut down by the Iranian judiciary after coming out in support of a nationwide strike.

What also marks the current protests out from previous ones is the emerging use by demonstrators of petrol bombs.

These have been used against bases of the Basij militia and Hawza, or religious schools for Shia Muslim clerics.

A 16-year-old boy, Arshia Emamgholizadeh, was arrested in the north-western city of Tabriz last month, accused of "turban tossing".
He was held for 10 days before being released. Two days later, he committed suicide, something his family blames on his treatment in prison. During his detention, Arshia had been beaten with batons and given unknown pills, a source close to the family told BBC Persian.
Iranian authorities have not only cracked down on protesters, but have also used the bodies of those who have died in custody or been killed as bargaining chips to silence the families of victims.
Fearing such pressure, the brother of a killed protester stole his body from a morgue, driving around town for hours, a source told BBC Persian.

Mehran Samak, 27, was shot in the head in the northern city of Bandar Anzali for honking his car's horn in celebration of Iran's elimination from the World Cup on 29 November.

Another family say they found shocking signs of torture on the body of their 23-year-old son, Hamed Salahshoor, who died in custody when they exhumed his body after he was forcibly buried 18 miles (30km) away from their home town.