EUTOP.news > Andrew > Russia is not to blame for Ukraine invasion - Putin

Russia is not to blame for Ukraine invasion - Putin 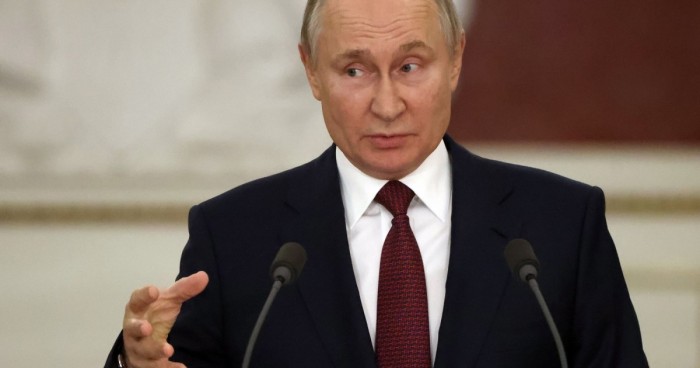 Vladimir Putin believes Russia is not to blame for the war in Ukraine, adding both countries are "sharing a tragedy".

"What's happening now is a tragedy, but it's not our fault."

During a televised address with senior military officials, the Russian president said he continued to see Ukraine as a "brotherly nation".

In February, President Putin sent up to 200,000 troops into Ukraine sparking a war which has led to tens of thousands of deaths.

He argued the conflict was "the result of the policy of third countries".
The theory, which implies Western expansion is the cause, has been repeatedly dismissed outside Russia.

During his address President Putin said the West had "brainwashed" post-Soviet republics, starting with Ukraine.

He said: "For years, we tried to build good-neighbourly relations with Ukraine, offering loans and cheap energy, but it did not work."

President Putin's longstanding concerns appear to stem from Nato's growth since the Soviet Union collapsed in 1991.

Nato's original goal was to challenge Russian expansion after World War Two, but the Kremlin has long argued Nato's acceptance of former Soviet allies as members threatens its security.

Tensions between the Kremlin and the West increased after the overthrow of pro-Kremlin Ukrainian President Viktor Yanukovych in 2014, following months of street protests.

In his address President Putin continued: "There's nothing to accuse us of. We've always seen Ukrainians as a brotherly people and I still think so.

"What's happening now is a tragedy, but it's not our fault."

Russia has launched more than 1,000 missiles and Iranian-made attack drones in a wave of strikes on Ukraine's power infrastructure which began on 10 October.
The attacks have plunged millions into darkness.

But by September that had all changed as he announced a "partial mobilisation", potentially drafting hundreds of thousands of Russian citizens into the armed forces, reports BBC.

Under the current law, Russians aged 18-27 can be called up for mandatory military service - Mr Shoigu is now proposing this covers citizens aged 21-30.

But, in recent months Ukrainian forces have made a series of major advances, including retaking Kherson - the only regional capital captured by Russian forces since the invasion.

The address came as Ukrainian leader Volodmyr Zelensky arrived in Washington for his first visit outside of Ukraine since Russia invaded 10 months ago.