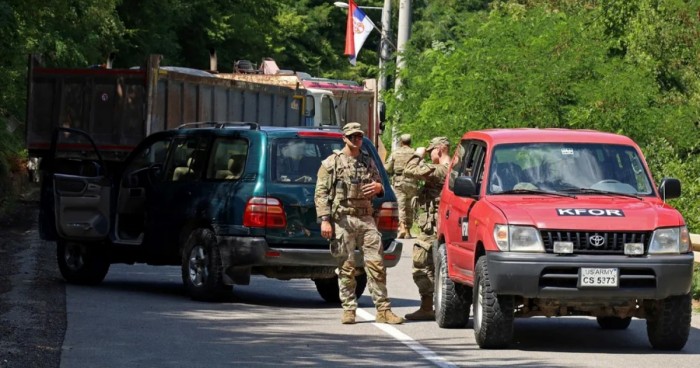 NATO-led peacekeepers in Kosovo said Monday they were investigating a shooting incident in a tense northern region, urging calm as Serbia’s top military officials inspected their troops on the border with Kosovo in a show of combat readiness, reports AP.

The incident on Sunday evening took place in Zubin Potok, a town in northern Kosovo where local ethnic Serbs have been manning road barricades for the past two weeks and where tensions have been running high between the two former wartime foes.

The peacekeepers, known as KFOR, said the incident happened in close proximity of one of their patrols, involving unknown people. A statement said no one was injured and “we are working to establish all the facts.” Serbia’s defense minister and the army’s chief of staff traveled to the border with Kosovo, praising the combat readiness of Serbian troops and their firepower, including howitzers and other military hardware. Serbia, which has been armed through Russian donations and military purchases, has been sabre rattling and threatening force against its former province for a long time.

Kosovo remains a potential flashpoint in the Balkans years after the 1998-99 war that ended with NATO intervention. Serbia doesn’t recognize the 2008 declaration of independence of its former province, while Western efforts to mediate a solution so far have failed.

“It is important for all involved to avoid any rhetoric or actions that can cause tensions and escalate the situation,” KFOR said in a statement. “We expect all actors to refrain from provocative shows of force and to seek the best solution to ensure the safety and security of all communities.”

Fears of violence have soared since the start of Russia’s war in Ukraine. The United States and most European Union countries have recognized Kosovo’s independence, while Serbia has relied on Russia and China in its bid to maintain claim on the province.

Tensions in Kosovo have risen further in recent weeks and months over several issues amid international efforts to step up mediation efforts. Most recently, ethnic Serbs in the north put up roadblocks in protest of an arrest of a former Serb police officer.

Serbs in the north previously had walked out of Kosovo’s institutions, claiming harassment by Kosovo authorities. Belgrade repeatedly has warned it would protect local Serbs “with all means” if they are attacked.

Kurti’s office said that “the common conclusion from this meeting is that freedom of movement should be restored and that there should be no barricades on any road.”

Serbia on Sunday held a top-level meeting after the shooting incident, with the army chief of staff later heading to the southern town of Raska, near Kosovo, where Serbian army troops are located. Local media carried a video with shots and shouts heard, but not showing clearly what happened at one of the barricades.

Gen. Milan Mojsilovic told local media that the army received “clear and precise” directions from Serbia’s populist president, Aleksandar Vucic. Mojsilovic described the situation as “serious,” adding that it requires the “presence of the Serbian army along the administrative line” with Kosovo, state RTS television reported.

Serbian army vehicles could be seen on the roads in the area on Monday, and the Balkan nation’s defense minister also arrived. Serbian Defense Minister Milos Vucevic, Gen. Mojsilovic and other senior army officers discussed the security situation during a meeting in Raska, a defense ministry statement said.

Serbia has asked KFOR to deploy up to 1,000 of its troops in the Serb-populated north of Kosovo, to protect Kosovo Serbs from alleged harassment by ethnic Albanians, who are the majority in the country. The request so far hasn’t been granted.

Adding to the tensions, Serbian Patriarch Porfirije was denied entry into Kosovo at a border crossing on Monday, after saying he would like to deliver a peace message for Serbian Orthodox Christmas, which is celebrated on Jan. 7.