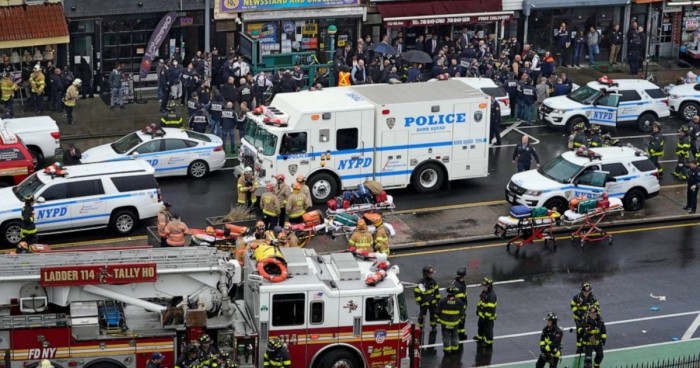 A gunman wearing a gas mask filled a crowded New York subway car with thick black smoke from a canister and opened fire on morning rush-hour passengers, injuring 16, including 10 with gunshot wounds.

A manhunt was under way on Tuesday after the shooter, described as a heavy-built Black male about 5ft 5in tall, wearing a green construction-type vest and hooded grey sweatshirt, fled the scene of the shooting. Injured passengers suffered from bullet wounds, smoke inhalation and the physical effects of panic. Nobody was reported to be in life-threatening condition.

Graphic photographs posted on social media showed the traumatic scenes on the platform of 36th Street station in the Sunset Park neighbourhood of Brooklyn around 8.30am. Wounded passengers were seen lying as others administered tourniquets to staunch bleeding from their legs. Another phone image showed blood smeared inside the train carriage and out on to the platform, indicating where a rider had been dragged to safety. Footage captured passengers screaming as they scrambled to escape the shooter.

In a press conference, the New York city police commissioner, Keechant Sewell, described events that began shortly before 8.24am as an N train bound for Manhattan was travelling between the 59th and 36th Street stations.

“An individual on that train donned what appeared to be a gas mask,” Sewell said. “He then took a canister out of his bag and opened it.”

Sewell continued: “The train at that time began to fill with smoke. He then opened fire, striking multiple people on the subway and in the platform.”

The commissioner said there was no known motive for the actions of the suspect. She sought to calm nerves among New Yorkers by saying the shooting was not being investigated as an act of terrorism, but later said she was “not ruling out anything”.

Agents of the joint terrorism taskforce were at the scene, along with FBI and NYPD officers. Joe Biden and the US attorney general, Merrick Garland, were briefed.

The attack brought fear and chaos back to New York City. Witnesses said they heard so many shots they lost count. Others said the shooting sounded like fireworks or popping, causing confusion among passengers.

Yav Montano, who was present inside the carriage as the attack unfolded, shared with CNN a 10-second video he captured as the train drew into the 36th Street station. People could be heard groaning and coughing and were seen covering their faces against thick smoke.

Montano said a smoke grenade was let off about two minutes before the train reached the station. Noise erupted and he crouched to the floor in an attempt to shield himself. “I didn’t realise it was shooting to start with,” Montano said. “It sounded like fire crackers, or a bunch of scattered popping.”

Montano estimated there were 40 to 50 passengers in the carriage.

“There were some people whose pants were covered with blood,” he said, adding that there was blood on the floor.

The passenger said the train slowed to a halt shortly before it reached the 36th Street station.

“That’s when the chaos happened. Thank goodness the train moved, because I don’t know what would have happened otherwise,” he said.

Other graphic footage was recorded as the N train pulled in. As its doors opened smoke poured out followed by passengers, some screaming, others stumbling and falling to the platform. Phone images showed blood on the floor of the car.