Ukraine Says Killing of Civilians in Bucha a «Deliberate Massacre» 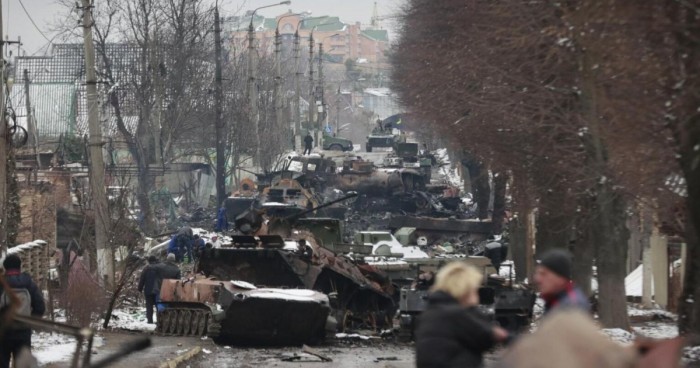 The killing of civilians in the town of Bucha near the Ukrainian capital was a "deliberate massacre," Foreign Minister Dmytro Kuleba said Sunday, after the hasty retreat of Russian forces from the area.

"Bucha massacre was deliberate. Russians aim to eliminate as many Ukrainians as they can. We must stop them and kick them out. I demand new devastating G7 sanctions NOW," Kuleba wrote on Twitter.

"Kyiv region. 21st century Hell. Bodies of men and women, who were killed with their hands tied. The worst crimes of Nazism have returned to EU," Ukrainian presidential adviser Mykhaylo Podolyak tweeted.

"This was purposely done by Russia. Impose an embargo on energy resources, close seaports. Stop the murders!"

The evidence has emerged of possible civilian killings around Kyiv as the Russian army has pulled back in the face of ferocious resistance from Ukrainian forces.

In Bucha, the bodies of nearly 300 civilians were found in mass graves after Russian troops withdrew, local officials said.

AFP reporters saw at least 20 bodies, all in civilian clothing, strewn across a single street. One had his hands tied behind his back with a white cloth, and his Ukrainian passport left open beside his body.

"EU is assisting Ukraine & NGO's in gathering of necessary evidence for pursuit in international courts."

British Foreign Minister Liz Truss said that as evidence mounted of "appalling acts" in the Ukrainian towns of Irpin and Bucha, Russia's attacks on civilians must be investigated as "war crimes."